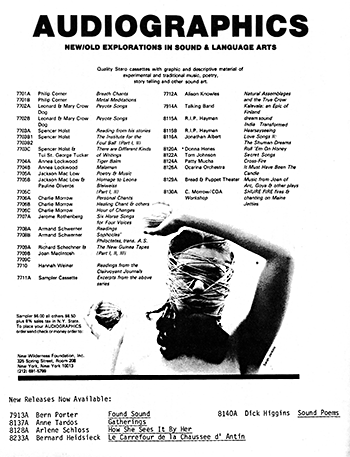 Audiographics was a project of the New Wilderness Foundation. The first series was produced by Ondina Fiori and Charlie Morrow. Graphic design - Mary Nell Hawk. Approximately 40 titles were released

It was the first artists audio work label in the USA. The programming range conformed with the New Wilderness new/old approach. At the time of production, the 1970s, mixing folk, so called native and high art work was new. Much has happened to break down the barriers, hierarchies still separate the sonic work in diverse cultures and disciplines, we still live in a world of categories. Fortunately, world music is a growing genre and the big remix is on.

This is a list of the Audiographics audio cassettes produced: