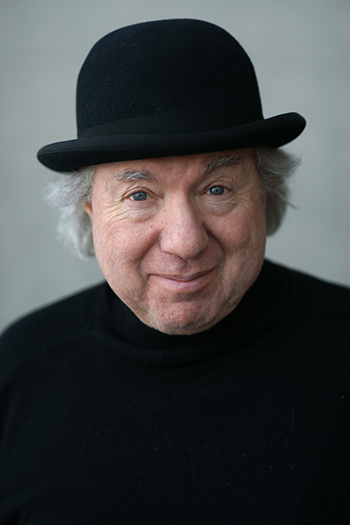 “His identity as an artist took shape during the 1960s; a decade when such identities became volatile, when shape shifting, border crossing and evasion of conventional classification started, once again, to become the norm.”

He has written hundreds of pieces over the last half century, ranging from the simplest of vocal chants to vast installations where thousands of people – folk singers, bell-ringers, rock and marching bands, ordinary passers-by – transformed the city of Copenhagen into a mass tintinnabulation.  Give him a gigantic orchestra or a conch shell, five household utensils or a brass ensemble, 40 cellos or 30 harps and he’ll return with some new music for you.  Charlie Morrow is a composer, performer, arranger, inventor, impresario -- and above all a keen, open and original mind.

As Morrow hears it, there are two musical universes running in parallel.   “The music in the outer world is a great soup, in which there is ambiance, a sense of location and specific sounds in different places.   The other universe is the inner world, the music that is inside, that comes to life when it hears music from outside or in the creation of music for that outside.   The two work together toward fulfillment -- inside, outside or together. The inner music is, in fact, I think a kind of steady heartbeat that runs through your whole life, a beat that has its own dimension. ”

It is a sign of Morrow’s independent approach to the art of music that, over the last 40 years, one of the only places you weren’t likely to hear his work was the concert hall.   After what he called “An Evening with the Two Charlies” – a program of works by Morrow and his own arrangements of music by Charles Ives -- presented at  New York’s Lincoln Center in 1973, it was time for something new.

“I decided to leave the concert hall because the ambiance seemed too quiet, too much of a blank canvas,” Morrow said in a recent interview.   “All my life, I more easily understood music with a clear sense of location, whether it was a kitchen where people were playing music for each other or improvising, or whether it was in a park, a street, a harbor – I liked the sense of specificity I’ve felt in every case.   Every location has its own personality and music is a way of reflecting and articulating that.”

And so Morrow moved into museums, electronic music, art galleries, cities and divers spaces around the world.   He has been equally at home creating created a “soundscape portrait” of Marilyn Monroe with collages of “found” sounds as he is “recomposing” Richard Strauss’s late masterpiece “Metamorphosen” as a sort of Medieval improvisation with the players reading from the 23 original parts, given a start time and ending time, with the condition that they must begin and finish the music at the same time.

Only now is he considering a return to the more traditional venues: “I recently wrote a Concerto Grosso for four horns and orchestra which might end up being played in the concert hall.”
“Then again, it can be played indoors or outdoors!”

Morrow, a warm, affable man who puts a visitor on a first name basis immediately, was born in 1942, the son of two New Jersey psychiatrists, and grew up in the New York suburbs of Rutherford and Passaic.    His first instruments were trumpet and bugle and he believes that the demands they made on his breathing may have helped him turn to music as a healing force.

“I was asthmatic – still am, to some degree – and playing the trumpet allowed me to feel normal,” he explained.   “It led me to many new places – the trumpet, radios and electronics – and it allowed my insides to feel OK.   Remember, too, that I was coming out of a home with two psychiatrists, and healing was a way of life.”

He attended Columbia College, where he studied with the electronic music pioneer Otto Luening and the ethnomusicologist Willard Rhodes, who Morrow credits with introducing him to oral cultures and shamanic traditions.   Later teachers included Stefan Wolpe and William Jay Sydeman.   In the meantime, he played in the Tone Roads Ensemble with his fellow composers Philip Corner, James Tenney and Malcolm Goldstein, through whom he became close to radical innovators such as Alison Knowles and John Cage.

His closest collaborator, however, was the poet Jerome Rothenberg, with whom, in 1964, he founded and co-directed The New Wilderness Foundation, which explored the avant-garde in all its dimensions, presenting concerts, issuing cassette recordings and, with another major collaborator, RIP Hayman, publishing EAR Magazine, which chronicled new and unusual composition as had no magazine since Minna Lederman’s legendary “Modern Music” in the years before the World Wars.

Morrow was also a master at creating public music events, from a widely-covered “Concert for Fish” coinciding with the resignation of Richard Nixon, to “Toot ‘N Blink,” a composition for two fleets of boats on Lake Michigan conducted by two radio DJs.  He also mounted city-wide summer solstice celebrations in New York City from 1973 to 1989, and “Citywave,” a musical event for the entire city of Copenhagen.

Film scores (the NASA documentary “Moonwalk One”), commercials and ad jingles (Hefty trash bags, Diet Coke), arrangements for pop groups (Simon and Garfunkel and the Rascals, no less), the creation of an “Ocarina Orchestra” as a group that could make good music without requiring technical expertise – one found Morrow everywhere.    In the fall of 2010, the “Little Charlie Festival” was held in New York and, over the course of five days, it presented a serious but by no means exhaustive portrait of Morrow’s activity.

By then, Morrow no longer lived in New York; for several years, he has divided his time between Barton, Vermont (a farm he bought from the composer Dick Higgins) and in Helsinki, where he lives with Maija-Leena Remes, who works with him on most of his projects.

Much of Morrow’s recent work has been in the realm of sound design.  His large-scale event soundscapings led to his invention of True3D immersive sound soundware and experiences, and with his company Charles Morrow Productions, he has been a pioneer in the field.  Leading museum designer Ralph Appelbaum brought MorrowSound® 3D soundscapes to Foster + Partners’ SC Johnson Fortaleza Hall, the Jewish Museum in Moscow, and Lincoln Castle’s Magna Carta installation in the U.K.

And, most recently, Morrow has become increasingly involved with what has come to be known as “virtual reality.”   “We have headsets that put you in a 360º world where, when you move your head around, you see something different.  It’s  a world in which your attention can go in any direction, so that you can be excited by where you are, by what you see and what you hear, in the same way you would in a fascinating real world environment—whether in a funhouse or at a concert, or in a theme park ride or in a race car, or under the sea—you can be transported to it. I see over time a larger and larger audience for being able to go into these virtual worlds. And our role in that is as a content provider and also as a software designer, in order to make those virtual worlds more interesting.”

What next?   More adventures, to be sure, but nobody, least of all Morrow, knows quite what they will be.  As ever, he remains philosophical.  “People say you're dying from the moment that you are born, but I like to think that you're living until the moment you die.”