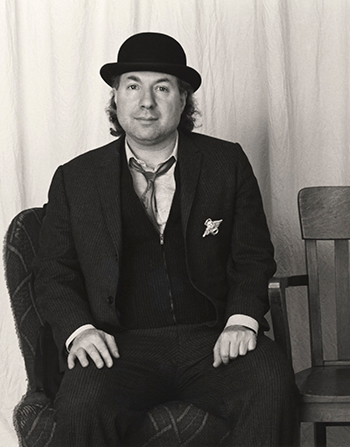 1957 – Psychic Music for Concert Band (no audible music). The musicians perform any work of music without making a sound, miming the performance. They create the music internally – mentally, emotionally – and psychically project it.

1957 – Air Music for Concert Band. The musicians perform any work of music, playing their instruments with only breath and instrument mechanism sounds.

1965 – Helped with arrangements on Simon and Garfunkel’s “Parsley, Sage, Rosemary, and Thyme” album.

1967 – Met Mike Appel and made arrangements for The Balloon Farm. 45rpm single, Question of Temperature, on the charts.

1968 – Arranged music for songs “Look Around” and “A Ray of Hope”. Wrote Look Around, Groovin', Do You Feel It, for Rascals and symphony orchestra, Joseph Eger, conductor. Recorded by Atlantic Records. Minsky's contact.

1968 – Joined ASCAP. Wrote manifesto: View from the Bottom of the Heap.

1971 – Greeting Piece, based on greeting gestures from around the world, developed and performed. Morrow has performed this piece for over 30 years.

1972 – Created and directed A Healing Piece with the Performance Group (a precursor to the Wooster Group) at the Performing Garage in Soho, NYC.

1973 – Awarded the CAPS grant for composition.

August 9, 1973 – Concert for Fish, a concert including sections in fish language, performed in Little Neck Bay. Performed in the hours between Richard Nixon’s resignation and Gerald Ford’s swearing–in. Made national and international news.

1974 – Jew's Harp Imitation Chant, for solo chanter or group, composed and performed. This piece is a vocalization of the Jew’s harp sound.

1974 – Kaddish: a setting in Tibetan style created. Calligraphy on parchment ink with gold and silver.

1974 – Created manifesto and lecture, Music Outside the Concert Hall.

1974 – The Book of Numbers written and performed at Phil Niblock’s loft concert series.

1975 – Composed and performed Chanting in Six Voices, for solo chanter in six different voices (or vocal characters), six different microphones, each feeding one of six loudspeakers set out in a hexagram.

1976 – Reveille and Taps across America composed and performed. Buglers across the country played, in sequence and based on timings, reveille at sunrise and taps at sunset.

1976 – Chanting Workshop conducted over a two–day period, exploring breath, chanting, listening, and concepts of the body as a bell.

1977 – Sky Song Chant composed and performed with gong and voice. The speed of the wind determines tempo; the formulaic melody is set at this tempo; the mood of the melody is determined by the color of the light and time of day; the presence of birds determines the introduction and shape of a second melody. When the birds are out of sight, the first melody resumes.

1977 – Music for Maysles' and Charlotte Zwerin film, History of the Newspaper.

1977 – Vision Chant (Dream Song) developed and performed by dropping into a dream world of the non–sleeping.

June 21, 1978 – Wave Music II for 100 musicians with lights and Native American singer, produced by New Wilderness, Solstice Celebration in Central Park at sundown. The piece concluded with all musicians performing all the way home.

1978 – Sun Chant sung by Charlie Morrow at SUNDAY, a celebration of solar energy at the United Nations and broadcast around the world. Leonard Crowdog, Robert Redford.

1979 – Transcanadian Sunrise performed in Nova Scotia and broadcast on radio stations across Canada at hour delays (for each sunrise across the continent).

1979 – “Group Chant”, a group vocal exploration of the word “soft,” composed and performed.

1979 – Participated in in New Music New York at the Kitchen, NYC, showcasing chants and the Ocarina Orchestra. Rhys Chatham, curator Met Poul Borum, poet and cultural journalist from Copenhagen. This event opened the world for Morrow

June 21, 1980 – Wave Music IV for Drum and Bugle Corps produced in Minneapolis as part of The Walker Art Center’s New Music America. The musicians’ uniforms were covered with small mirrors. The tempo gradually increased from the beginning of the piece until sunrise.

1980 – Performance at Company Week Festival in London in which Morrow and Toshinori Kondo marched outside the venue to be off stage trumpeters, playing through the wall into the concert hall, only to be detained by a London bobby who escorted the duo back into the hall to check their credentials.

1980 – Francesco Conz, via Dick Higgins, comes to CMA GGK office. Conz commissions from Morrow a one–off piano modification and a limited edition on textile, Copenhagen Waves (1986) one page had drawn score for the event in Denmark.

July 1982 – Toot’n Blink performed in collaboration with New Music America, Chicago, and in honor of John Cage’s 70th birthday. Composed for two fleets of boats on Lake Michigan and conducted by two disk jockeys. Cage told the media “I prefer the blinks.”

December 21, 1982 – A Participatory Chant held on the beach at Battery Park Landfill on the evening of the winter solstice to invoke the female forces of the universe present in all people.

1983 – Bells in Belgium. International Solstice Celebration performance with electronics on bells in Renaissance belfry in Ghent. Other performances joined in from around the world.

September 1983 – Father passed away. Charlie returned to the family home and, in the attic, found a good-as-new black bowler hat with “JLM” for Joseph Lloyd Morrow on the inside headband.

Oct 8, 1984 – Wave Music VII for 30 Harps produced in the Cathedral of St. John the Divine, NYC by Wendy Chambers. Staged along with a work by Wendy and one by John Cage.

June 1985 –– City Wave Copenhagen staged in collaboration with Trevor Davies for the opening of the Fools festival, a celebration for all of Copenhagen, DK. The piece involved more than one thousand Danish performers. Met Flemming Madsen.

1986 – Universitas, a simultaneous performance of many national anthems, composed and staged at University of Louvain, Belgium. Produced by Logos, Ghent BE.

1987 – Music VIII for 6 Harpsichords, a perpetuam motem conducted with light beams, performed at Symphony Space, NYC and produced by Wendy Chambers along with a work by her.

1987 – “Sound Drawers,” a sonic self portrait, created. An Ikea 6 drawer bedside unit is fitted with loudspeakers in each drawer, which when opened plays a sound file of Morrow voice sounds.

1987 – Designed sound and scored P–A. Simma’s Beyond Night and Day, one of the first feature films in Sami language.

December 22,1987 – Fire Skater and Winter Bells Solstice Celebration.
Winter Bells celebrated the winter solstice with music. The fire skater’s blades were wire–less mixed with a chorus of trombones performing as many of the Churchbells of New York rang. Sponsored by the NY City Dept. of Parks and Recreation.

August 1988 – Staged Montgolfier Musique Event in Lund, Sweden. A celebration of pioneering hot air balloonists the Montgolfier brothers. The event consisted of clown marching band, equestrian drill team and music piped from the balloon baskets as they rose into the sky.

October 1988 – Married to Lana Frkovic in a Flux Wedding in the Emily Harvey Gallery.

1991 – Composed music for Eleanor Antin's Man Without A World.

1992 – Kautokeino, Sweden. Helped Asa Simma organize international artists for the first gathering of Sami peoples from around the arctic regions.

1995 – Conducted a project with the Wildlife Conservation Society’s Bronx Zoo.

1995 – Created “Sound Reliquary,” a box designed to hold short sounds and play them back. It holds the last sound recorded, like a relic. The sound can be recorded over by another sound.

1996 – Scrutiny in the Great Round (CD ROM), in collaboration with Jim Gasperini and Tennessee Rice Dixon, won the grand prix Milia D’Or at Cannes.

1996 – Composed and staged The History of the Jews, a montage loop with solos by Yuval Waldman and Arturo Sergi.

1996 – Passive Sound Art Works – Shape of Sound Show at Exit Art, New York
“Belleview”. The listener(s) stand under a bell–shaped metal resonator and listen(s).
“Listening Glasses”. The listener stands between two large glass resonators mounted into a wall mount with piano hinges and listens
“Listening box with pipes”. The users speak into and listen to pipes set into a large wood box.
“Listening Blades”. The user places the strap mounted pair of washing machine impellers over the head and ears, and listens.

1996 – Designed, recorded and installed a seven–language audio tour for the Kennedy Space Center in the form of bus tours and JVC audio tour players.

1997 – Conceptualized and constructed Heartbeat Machine. A version of this machine called And the Beat Goes On is on display at the American Heart Association’s headquarters in Phoenix, AR.

1999 – Designed and installed sound environments with recorded actors for the Altoona Railroaders Memorial Museum. Granted an award for this installation from a transportation museums association.

1999 – Design and installation of a multichannel sound environment in the Hall of Planet Earth in the Rose Center of the American Museum of Natural History.
RAANY. Melanie Ide.

1999 – Created Hoerspiel for Schoening, WDR, Song of the Rolling Earth

2000 – Created audio and AV production for the Smithsonian Institution’s The Vikings exhibition. This exhibition was cover story in Time Magazine and The New York Times.

2001 – Composed, recorded, and broadcasted A Future Harvest – Vocalize, a twenty–eight minute work exploring human consumption of life on land, in the sea and in the creative world. This was Morrow’s final radio piece for Klaus Scheming’s Studio for Acoustic Art, WDR, Cologne, Germany.

2001 – Lectured on sound design for The Aspen International Design Conference and Helsinki University of Technology.

January 2003 – Mother passed Away. Morrow played for his mother on the Caribbean conch horn during the funeral.

2003 – Installed smart projection plus spatial sound for the Smithsonian National Museum of Natural History and for Denver Museum of Art and Science Gates Planetarium.

2003 – Audubon’s Aviary, a 3D sound Installation with sensor speakers, installed at New York Historical Society. Sounds of birds envelop the exhibition’s visitors. They fly in characteristic patterns through the space and through the walls.

2004 – Participated in the Future of Sound, at the British Academy Awards.

2004 – Three Hats, triple essay, published in English and Danish by Roskilde Museum of Contemporary At.

2006 – Not Much to Look At, solo show at Archivio Emily Harvey, Venice, Italy.

2007 – Composed and recorded Central Park 1850, a montage of 1850 Central Park, New York bird songs based on historical records and sound from the Cornell Ornithological Lab.

2007 – Composed Central Park 2007, a montage of 2007 Central Park, New York bird songs based on historical records and sound from the Cornell Ornithological Lab.

2010 – Land Sea Air, history of the past, present and future of sound on the Earthin MorrowSound True3D. Steelcase Gallery, New York

May 2012 – Bowling in Bowlers, an afternoon of sound poetry and lawn bowling produced in collaboration with Tom Comitta. Staged at the Oakland Lawn Bowling Club.

October 2012 – Moving My Vowels – Systematic Shifts in the Service of Patriotism published by calmaplombprombombbalm.com and released at the Kelly Writer’s House reading.

2015 – Becomes a member of Society of Finnish Composers.

2015 – Appointed chairman of the immersive sound committee of the International Planetarium Society.