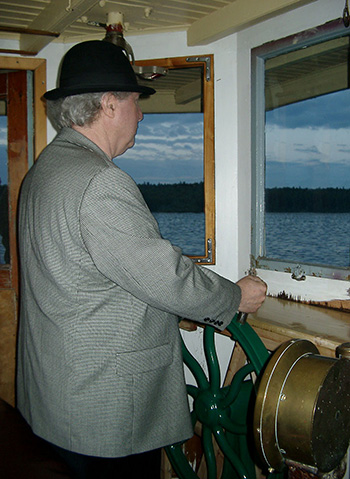 
Charlie Morrow (b. 1942 in Newark, NJ) is a composer, sound artist, performer, and innovator whose goal over the past four decades has been to bring experimental sound and music to a wider audience. And, through avenues including concert performances and ad jingles, city-wide events and film scores, museum sound installations and hospital sound environments, his work has in fact been experienced by a wider audience than most creative artists can claim.

A composer who studied with Stefan Wolpe and worked with avant-garde Fluxus artists in New York in the 1960s, Morrow has written works that range from the “recomposition” Very Slow Gabrieli, a Giovanni Gabrieli sonata stretched many times its normal length, to Toot ‘N Blink, an orchestrated chorus of boat horns with blinking lights, as well as the score to the acclaimed 1970 documentary Moonwalk One and innumerable ad jingles, including those for Hefty trash bags (“Hefty, Hefty, Hefty! Wimpy, wimpy, wimpy!”) and Diet Coke. In 2010, he was honored in New York with Little Charlie Fest, a five-day celebration of his work presented and organized by Michael Schumacher/Diapason Sound Art Gallery, John Doswell Productions and WFMU FM in association with Steelcase.

A trailblazer in staging large-scale festival events—at which he was always recognizable in his signature bowler hat—Morrow created city-wide summer solstice celebrations in New York City from 1973 to 1989 through the New Wilderness Foundation, an arts organization he founded in 1974 with poet Jerome Rothenberg that promoted cross-cultural and cross-disciplinary art and performance, while exploring relationships between current developments and cultures of the distant past.

And in 1979 he founded Charles Morrow Productions and built a global network for sound explorations. In the 21st century, he created MorrowSound®state-of-the-art technologies – including True 3D sound and 360° VR sound (see below) – at the forefront of the rapidly-expanding field of immersive sound.  His work in the creation of sound environments is currently showcased in venues worldwide, including the Magic Forest & Aviary at Nationwide Children's Hospital in Columbus, Ohio; Marimekko’s New York flagship store on Fifth Avenue; SC Johnson’s corporate headquarters in Racine, Wisconsin; and the Hall of Planet Earth in the Rose Center for Earth and Space at New York’s American Museum of Natural History.

In the coming weeks and months this year and next, three distinct exponents of Charlie Morrow’s sound work will be showcased in the U.S., the U.K., and Finland:

A Case In Point:  A Competition for Performances of John Cage’s 4’33” in Berlin and New York
Charlie Morrow calls avant-garde music pioneer John Cage “my patron saint.”  On November 16, 2014, Charles Morrow Productions presented an event that took place simultaneously at Galerie Mario Mazzoli, Berlin, and the Ear Up! Gallery at the fabled Ear Inn in New York City: a looped installation of 12 finalists, selected from 37 submissions, of the David Tudor Memorial 4'33” Competition, a “celebration and rethinking of impermanence” curated by Charlie Morrow and Christopher Williams, and named for the pianist who premiered the landmark John Cage work, four minutes and 33 seconds of no intentional sound.

Recordings of 4’33” – essentially recordings of  12 sound environments—submitted by those including composer Phil Niblock, artist Nina Kuo, and sound artist Andres Bosshard, were experienced in 3D using Morrow’s Sound Cube, a surrounding system of eight speakers creating an immersive sound space.  The recordings—which were made with systems of varying sophistication—were channeled by the Sound Cube to create an immersive  3D sonic location for each.

What is MorrowSound® True3D Sound?

Using Morrow’s Sound Cube, a surrounding system of eight speakers, True3D sound projects sound above and below the listening plane, creating the illusion of an expanded space where sound moves up, down and around.

True3D sound has been showcased at major venues and events around the world, including the Smithsonian’s National Museum of Natural History, the 2006 Torino Winter Olympics, and 2009 Design Week Helsinki.

Charlie Morrow is a composer in every sense of the word, creator of avant-garde music spectacles and commercial jingles alike, developer of support structures for performances and events, and founder and co-founder of numerous organizations for the presentation of new music, performance, and poetry.

As a 2013 KALW radio documentary put it, “How did the son of two New Jersey psychiatrists come to be known as ‘the man in the bowler hat’ – sound artist, impresario, and catalyst for creativity for so many others?”

Charlie Morrow calls himself a “framemaker” – a creator and producer of context.  His life’s work – 50 years as a hybrid, with one foot each in the classical and commercial music worlds – has been devoted to, in his words, “moving out of the concert hall.  The future lies in composing environments as well as music as we know it:  bringing the skills of composition to where we live work and circulate, as in a city.”  Born to a family of doctors and inventors, Morrow uses his creativity to make tools to share with others – not only musicians and sound artists, but teachers, architects, and engineers –  “so that they might create positive spaces for work, education, and healing.”